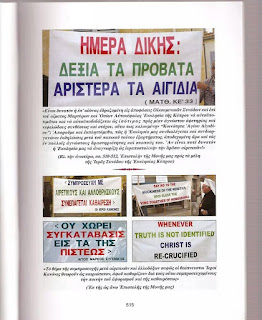 
Mone of the main falsehoods Pentecostal error and the predominantly external criterion by which the various Pentecostal groups believe someone as you saved it is the gift of speaking in tongues, which they perceive as personal fulfillment of each one with the Holy Spirit, to repeat the event of Pentecost, as happened to the holy Apostles. [www.Pentecost.gr/Greece/history keim.htm. H. D.Reimer. Pfingstbewegung, Munehen 1995, σελ. 961-962].

The called speaking in tongues is proof pursuant Pentecostals of their "baptism with the Holy Spirit" [A.-S. McPherson, symbol of Pisteos.The four Square Gospel. Sel.19-21. Lymperis Siologkas, Steps leading to the blessings of God. P.17] and guaranteed receipt of the Christ at the rapture of the church, before the advent of the Antichrist, according to another their falsehoods.

Taftochronos supposedly is certification criterion that someone belongs to the church and are living members, since according to the misled allegedly true church in the end times is true feature of speaking in tongues.

As proof of their claims rely crowd hagiographical passages related to the presence of the gift of tongues in the years of the Apostles. What relationship but are the villages mentioned in the gift of speaking in tongues, as it existed in the ancient Church, the phenomenon of speaking in tongues Pentecostals? Undoubtedly no. Moreover, not only are not related, because misinterpret and why the submissions and the tongues of Pentecostal experiences are radically opposed to the Bible.

As examples will highlight the following:

They cite the prophecy Joel 3.1-2considering as pouring of the Spirit in the last days the phenomena of the area. Last days But in this passage is considered the first advent of Christ why the Apostle. Peter in Acts. 2.16 states that the prophecy has already been fulfilled on the day of Pentecost. On the day of Pentecost the Apostles speak foreign languages ​​existent, familiar, understandable (Πράξ. 2,4).

This is confirmed by dozens of people from different origins, who listened and understood the greatness of God everyone in the language of (Πράξ. 2, 6-8,11).

In contrast, in gatherings of Pentecostals who tongues gibber, say incomprehensible words, unknown, incomprehensible, asyntachtes sentences sometimes resemble delirium accompanied where appropriate and with spasms of the body.

The opposite claim Pentecostals , Seen as the sine qua non proof filling of the believer with the Holy Spirit. When the apostle Paul, also the gift of speaking in tongues is placed last series of gifts (I Cor. 12.8 to 10, 28). Pentecostals here reverse the order and consider first, main and basic.

The Bible says that speaking in tongues was then given as a supernatural sign not for believers but for unbelievers, to motivate and to believe(I Cor. 14, 22).

The opposite teach Pentecostals, And consider it as the first point of salvation is certain.

Tha complete our observations with another label key referred to the character of the experience of speaking in tongues Pentecostals. While the gifts granted by God to the Church given freely and effortlessly to increase in Christ and unity of His Body (AKor.12), speaking in tongues Pentecostals is the fruit of various techniques, exhilarating events, emotional, and psychological submission pressures.


Nomizoume that is understood, as far as we mentioned, that the tongues of modern Pentecostal has nothing to do with the gift of speaking in tongues of the ancient Church. Are energies of the spirit of error, which being transformed into an angel of light presents them as somehow off - experience the filling with the Holy Spirit. This is confirmed by the fact that there are Pentecostal groups speaking in tongues but unitarian. In this case it is clear what spirit epidemic and there.

According therefore to a Greek Protestant called "baptism with the Holy Spirit"Pentecostals whose fruit is speaking in tongues, is perception, false,"absolutely no support in the Bible (···) Look carefully the New Testament and nowhere will meet the baptism of the Holy Spirit as something separate from regeneration.» [G.A.Chatziantoniou. The Holy Spirit. The two phases of the project, the Voice of the gospel, 57 Febr. 1997. sel.62]

"Is also transformed into an evil light"The Bible warns us that Satan "is transformed into an evil light" to deceive. The incidents in which Christians, even monks, are victims of scornful demonic impersonations are fully depicted in the case of Ἱ.M.Yassio Nikodimou "Gerontiko of Dreams and Dreams".We are also aware of the Holy Office, that even if "an angel of the world is proclaimed to be, even if we receive" a "refusal". That is why any proclaimed union that damages the saving Truth of the Church can not be accepted as a conspirator of confusion and sacrifice, as long as it is based on the breath of our cause, which seeks spectacles, not in the "Spirit of the Spirit" the glorious Fathers, but those of the pilgrims of the Christians, who proclaim the prophets themselves. by the great apostles
στις Νοεμβρίου 02, 2019 Δεν υπάρχουν σχόλια:

Αποστολή με μήνυμα ηλεκτρονικού ταχυδρομείου BlogThis!Μοιραστείτε το στο TwitterΜοιραστείτε το στο FacebookΚοινοποίηση στο Pinterest
Nowadays, the dark forces of Satan are called Aliens,or something negative beings.They are entities OF SATAN,who like to mess your your mind.and they have done it in a very pretty way It is a sign of the spiritual crisis of today that modern humans, with all the proud "enlightenment" and "wisdom" them, are once again aware of such experiences - but no longer have the Christian infrastructure to interpret them with it . Modern UFO researchers, searching for an explanation for phenomena which have become very noticeable to the sight now, have been partners in today's psychic investigators in an effort to formulate a "unified field theory" that would include psychological as well as material phenomena . But such researchers still only approach the modern "enlightened" man and trust the scientific observations to give answers to a spiritual field that absolutely can not be accessed "objectively" but only by faith. The natural world is morally neutral and can become known relatively well in an objective observer; but the invisible spiritual realm includes good and evil beings, and "objective" observer has no means to distinguish from one another, except if it accepts the revelation that has done about these humans the invisible God. So, today's UFO researchers place the divine inspiration of the Bible on par with the satanic inspired automatic writing of spiritualism, and do not distinguish between the action of the angels and that of demons. Many recent studies of UFO by evangelical Protestants, collect all these items and reach the conclusion that the UFO phenomena is simply just demonic origin. * It is difficult to reach a different conclusion Orthodox Christian researcher. Some or many of the experiences might be the result of fraud or hallucinations; but it is simply impossible to dismiss one all the many thousands of UFO reports in this way. A large number of modern mediums and their spiritualistic phenomena are also deceptively; but mentioumistikos spiritualism, when is genuine, undoubtedly produces truly "paranormal" phenomena under the action of demons. The phenomena UFO, having the same source, is no less real. PAY ATTENTION HERE=There is both human,and devils manifest-manufacturer.The Stealth bomber is our most advanced technology that the American public is aware of and it was developed 30 years ago. What do you think they have now? 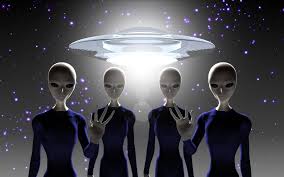